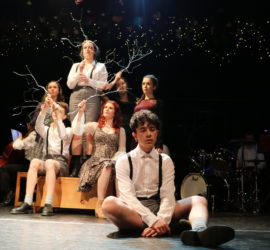 Read more about the theatre company and find out how to apply for a show. 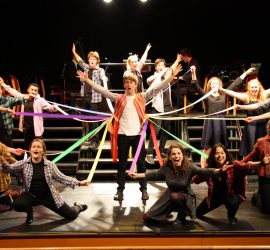 Check out the complete list of productions that have featured at the Brickhouse! 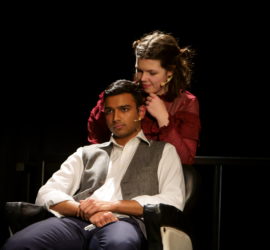 Find out more about the theatre's technical specifications and provisions.

Cathy: A Retelling of Wuthering Heights

This new musical by Michael Bascom retells the story of Heathcliff and Cathy, two soul-bound lovers thwarted by family, society and God. The sun shines over the moors, but a storm of vengeance is brewing in this story of a passionate romance which transcends life – and death – itself. Described as ‘a highly moving production, brilliantly depicting the tragedy and passion of Bronte’s novel’ (TCS), the show sees its Fringe debut after premiering last November to a critically acclaimed, sold-out run at the University of Cambridge.

In the sitting room of a dishevelled flat in post-war London, Hester Collyer is found by her neighbours in the aftermath of a failed suicide attempt. Slowly, the story of her tempestuous affair with an alcoholic RAF pilot and the breakdown of her marriage to a High Court judge begins to unravel. With it comes a portrait of a woman steeped in need, loneliness, and a long-repressed passion.

Terence Rattigan’s masterpiece and one of the greatest tragedies of the twentieth century, The Deep Blue Sea offers a close and unflinching look at the fragile veneer of social repression and the brutal sense of loss and longing that lingers just beneath.

Newly set in 2019, Funny Girl follows the story of Fanny Brice, talented and irrepressible but incapable of succeeding as a woman in traditional showbiz because she doesn’t fit the mould of the all-American beauty queen. The show charts her meteoric rise through comedy instead and her turbulent marriage to Nicky, who struggles to cope with his wife’s successes. Featuring such hit songs as “People”, “The Music that Makes Me Dance” and of course “Don’t Rain on my Parade”, Funny Girl is not to be missed!

Thrill Me: The Leopold and Loeb Story

“But you’ve asked a simple question, and I’ve told you why. It wasn’t on a dare or on a whim. It’s hard to comprehend now that the reason why, was simply that I went along with him.”

Relationships can be murder. In 1924, two wealthy Chicago University students abducted and murdered a young boy for no reason other than wanting to carry out ‘the perfect crime’. Thirty-four years later, the true motives were revealed. Stephen Dolginoff’s one-act musical brings real-life thrill killers and homosexual lovers Nathan Leopold and Richard Loeb to centre stage. It focuses on their dysfunctional romantic relationship, and how it eventually led to their imprisonment for ‘the crime of the century’. With a fast-paced narrative and captivating score, Thrill Me tells a story of obsession, sex and misguided philosophy.

In association with the Cambridge University Musical Theatre Society